The Advent of Real-time

The new possibilities of gaming technology

Driven by hardware advances made in the games console arms race, and a desire for property developers to stand out from the crowd, real-time technology is finding greater relevancy. It's not a particularly new concept in architectural visualisation, but it has often been dismissed as 'gimmicky' and lacking the fidelity we are able to produce in our traditional, high-resolution renders. The release of Unreal Engine 4 (UE4) has reignited the real-time debate, as well as some in-house R&D. Has the technology matured, or is it still the preserve of the Playstations and Xboxes?

So why real-time, what can it offer that our stills and animations don't? It sounds like a loaded question, but there's certainly no danger of every arch-vis artist having to re-train en masse. For us, the benefits of real-time lie in freedom, interactivity, and customisation. Flat images become explorable canvases where you have the power to turn night into day and personalise your potential apartment. But this should not be seen as an evolution of the 'conventional' render, merely as an alternative. 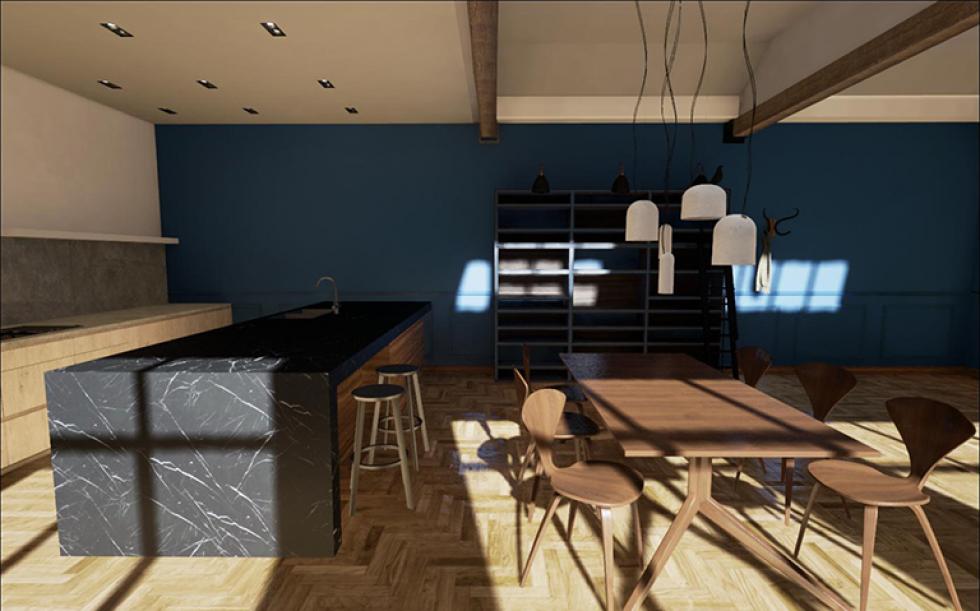 There's a reason why we go through a pre-production process. As artists we strive to find the best locations to place cameras, form attractive compositions, and light each shot individually to convey the mood. As soon as the end user changes the perspective our vision is changed, and the 'purpose' of the image may be lost. Artists are used to being the story-tellers of their work, and enabling the viewer to find their own narrative is a delicate power shift.

The only sure way to test the possibilities / limitations of Unreal has been to try it for ourselves. Using A Place Called Home as a 'test bed', we experimented with the various features by adding interaction to the space. The goal is to seamlessly blend between 3 design profiles, allowing the user to choose their favourite pieces of furniture, change the colour scheme, and select custom finishes for floors and worktops.

The key word there is 'seamlessly'; how do we implement this high-level interaction? The engine lends itself well to the Xbox controller, which makes it accessible to some but may put off others. The association with a gaming peripheral could 'cheapen' the product, or perhaps over complicate it. But at a basic level we want the user to be able to move and look at the same time, and that problem would still exist with touch screen controls. In his article Don't Believe the CGI Ben mentioned the 'instant gratification culture' we have, and perhaps these interactive spaces appeal more to Generation Playstation. But as the gaming industry continues to mature and becomes further integrated into the mainstream, perhaps we are underestimating how well its ideals will be embraced. The profile of the average gamer is changing, so it'd be remiss of us to neglect such a large user base.

If we are chasing realism with our real-time work, we have to be careful not to forget the fundamentals Jane outlined in A Sense Of Home. We should be aiming to use real-time to help enhance the tactility of the furnishings and finishes we create, after all, if we are allowing users to walk right up to brick walls and fabric throws we have to make sure they look good! Fortunately the developers of UE4 (Epic) have made efforts to make this a simpler process. One 'unreal unit' is now equal to one centimetre and not an arbitrary value, and the physically based shading system follows a workflow not too dissimilar to the one we use already. 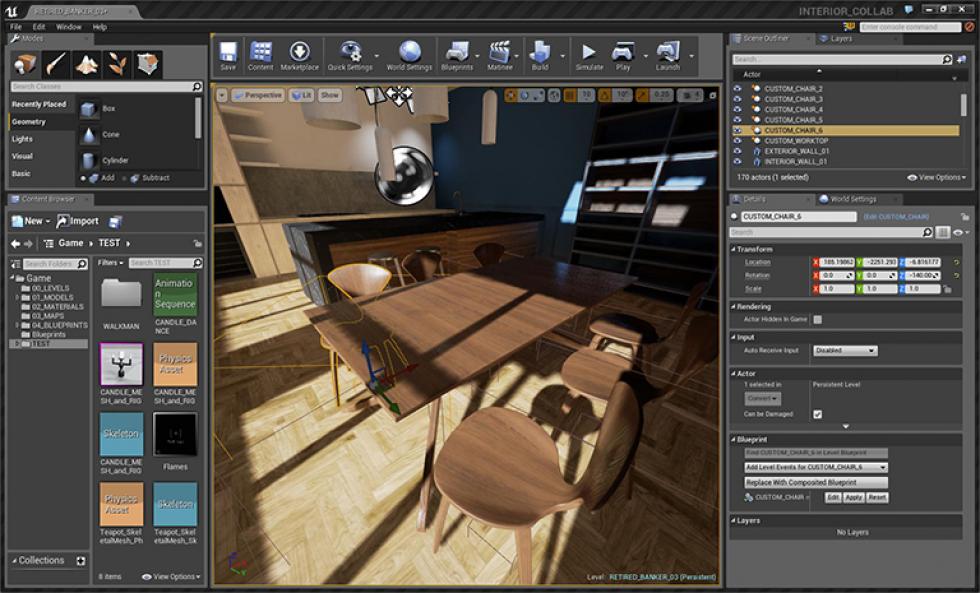 The sheer wealth of possibilities make 'real-time' impossible to ignore. Aside from the furnished apartment example, we can simulate the bigger picture, look down from the clouds upon an entire city and zoom into areas of interest, while a day / night cycle brings the world to life. The integrated Oculus Rift support alone promises levels of immersion previously unseen. My background and education is in Game Design, so I've been an interested observer as the technology develops. It feels like a tipping point has been reached with UE4, Unity, and CryEngine all now vying for new, untapped markets. We'll share any further developments we make in response, so keep your eyes on the site.